Aquaponics is the combination of aquaculture and hydroponics: raising fish and plants together for a safe, dense, and sustainable food production. The nutrient-rich water from the fish tanks acts as fertilizer for the plants and the plants clean the water the fish lives in. This type of system has been used for thousands of years in Asia, mainly China and other places that have large areas of swampy land. The most common aquaponics culture is the Tilapia-Azolla-Rice. Tilapia is a very hardy fish species, Azolla is a floating aquatic macrophyte that produces oxygen for the fish but can also act as feed for the fish, and finally rice, which is harvested straight for human consumption.

During the last few decades, the science and technology behind aquaponics farming is steadily increasing. Research scientists, hobbyists, educators, students, and commercial growers are all currently contributing to the development of this technology.

There are three main types of hydroponic systems that are being evolved and used. The system designs are media-filled bed (grow bed), floating raft, and nutrient film technology (NFT). Below is a quick explanation of each type. 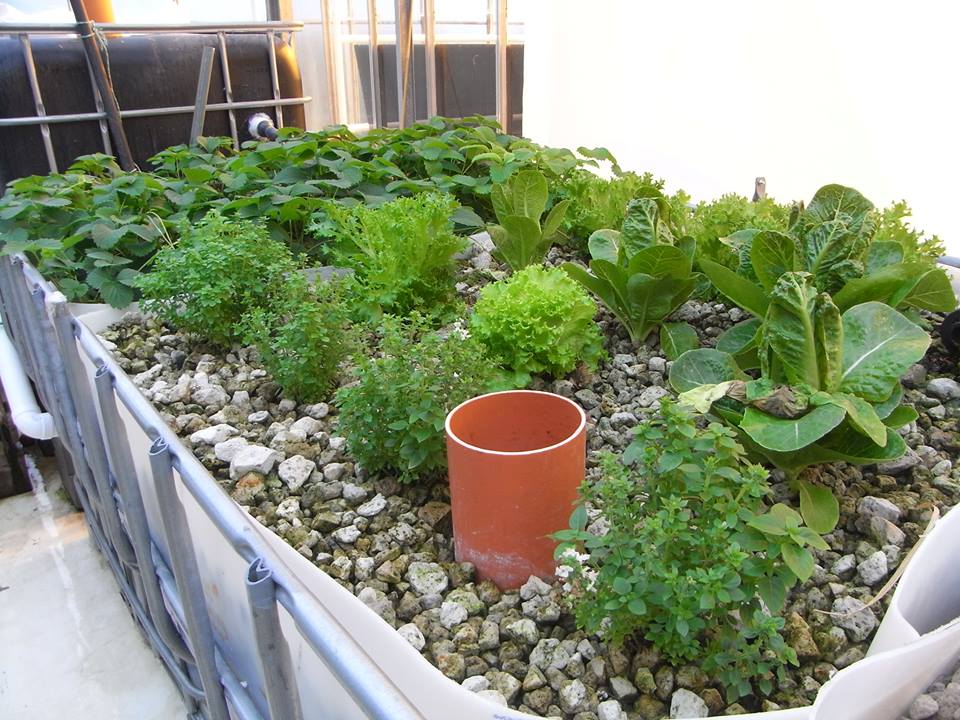 A media-filled bed system (grow bed system) is the simplest type of hydroponic systems. The plant containers are filled with media, such as clay balls, pumice, stone, gravel etc., serving several roles. The media acts as a filtration device (solid waste capture and biofiltration) and as support for the plants. This system can be run in two different ways, with a continuous flow of water over the rocks or by flood and drain water flow cycle. The flood and drain flow cycle can add additional oxygen to the system. When the water reaches a certain level, it is quickly drained, which will draw oxygen back down into the grow bed for the benefit of the plants and microbes. It has been proven that the most effective media depth for plant growth and bacteria cultivation is 12 inches. 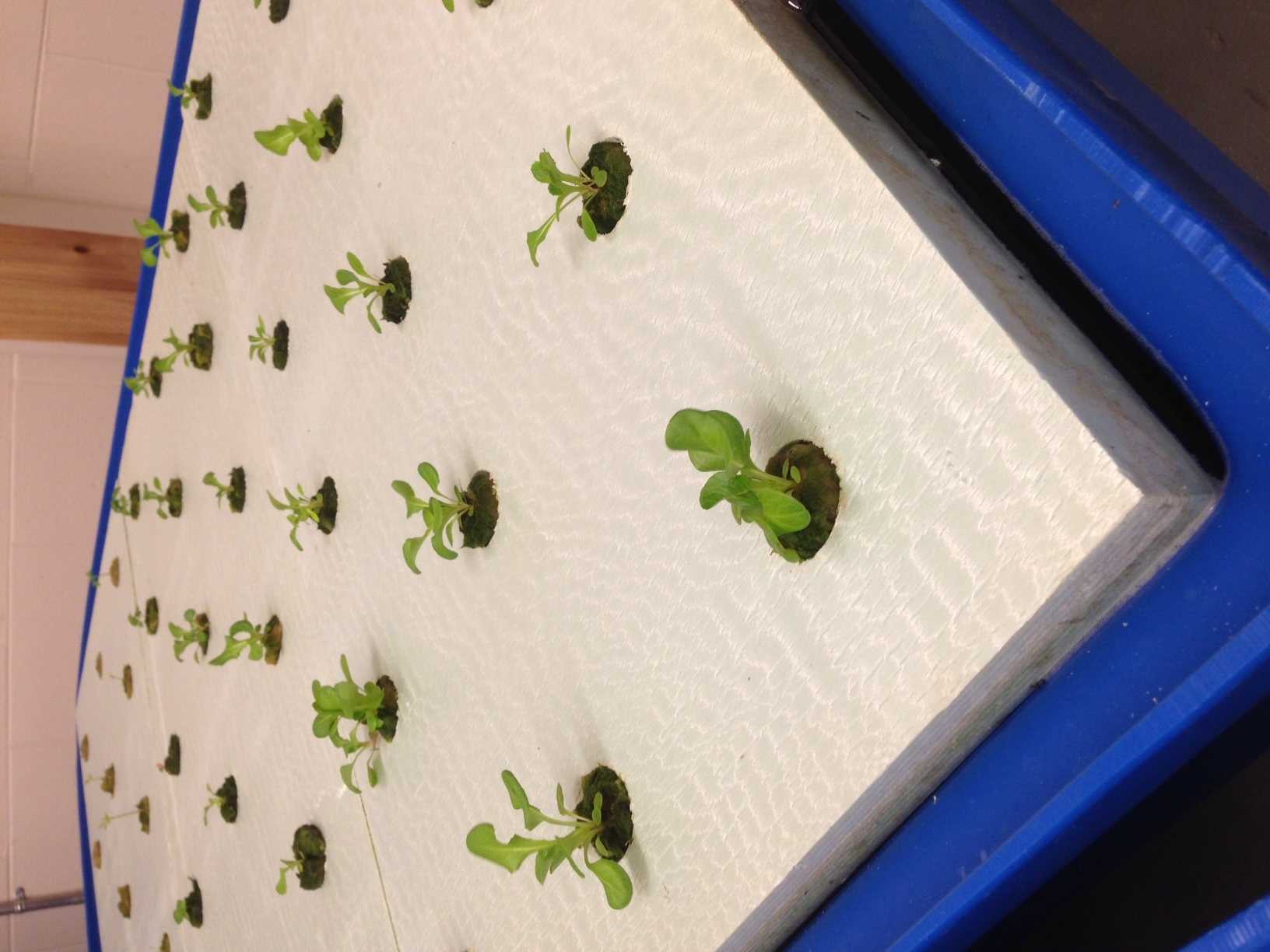 In a floating raft-based system (also know as float, deep flow and deep channel), the plants are planted in little cups that sit on foam boards that float on top of the water. The plant roots reach the water underneath and get their nutrients from the water. Both this system and the NFT system, which is described better in next paragraph, require more filtration than the media filled bed. A floating raft system is the most common commercial scale design, where it scales up well and can be set up relatively inexpensively. The most common crops grown in this type of system are lettuce and basil. However, large variety of leafy plants and herbs can be grown in such a system. Even cucumbers are being tested as a possible suitable choice for such a system. Since cucumber plants are tall, large, and cumbersome, an additional support at top is needed in order to keep the plant from falling down. 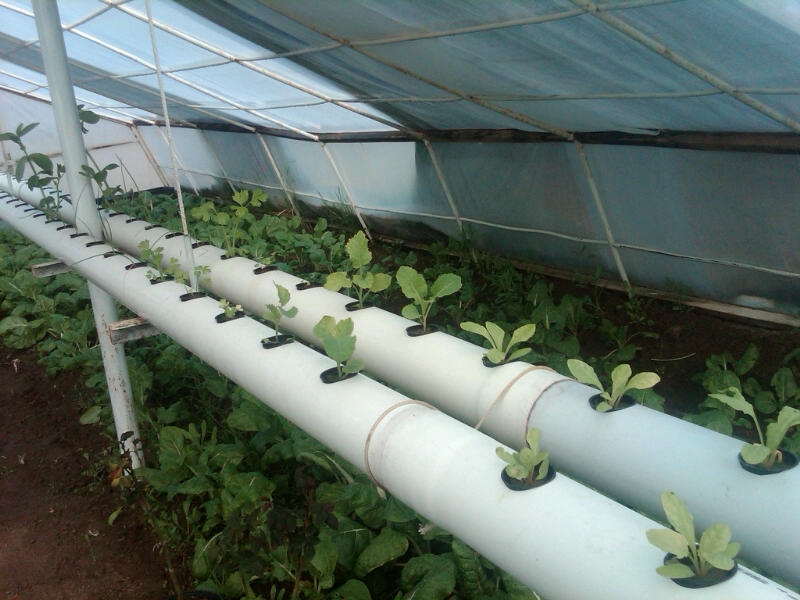 Nutrient film technology (NFT) is not a very common method used in aquaponics, however it is very common in hydroponic production. In NFT the plants are grown in small cups, which sit in long narrow channels, both horizontally and vertically. A thin film of water continuously flows through the channels, provides the plant roots with water, nutrients, and oxygen. This type of system is only to be used for leafy greens and herbs. The root systems of larger plants will be too big and too heavy for the small and lightweight gutters. The water from the fish tanks will need to be filtrated before entering the gutters. The filtration is necessary to prevent the gutters from particle build up around the plant roots, which will hinder the plants from taking up the nutrients and oxygen that they need.